​Witness the proud of Sri Lanka Ramayana short tour during 7 days of Sri Lanka history which is inclusive of the main historical places in Sri Lanka. Observe the remains reflecting the ancient royal majesty of the ancient kingdoms of Sri Lanka. Be inspired by the sacred temples and shrines with immense historical value and enjoy the natural beauty of the prehistoric cities and sites of sri lanka ramayana trail package. The ruins of the ancient buildings reveal the incredible architectural techniques of the golden eras in the short tour of Sri Lanka Ramayana history.
Destinations Covered :
Dambulla - Sigiriya - Kandy - Nuwara Eliya - Ella - Yala - Galle - Bentota - Colombo

You will be welcomed by our Sanki Leisure representative at the airport and transfer to Dambulla, En route visit the Pinnwala Elephant Orphanage. This elephant Orphanage is setup especially for Abandoned or injured baby elephants. it's started in 1975, the orphanage has grown to be a big family today.  A unique experience never to be missed. Feeding and bathing in the river provide the best opportunities to see the animal's close-up. After lunch you will proceed to Dambulla. Dambulla is a vast isolated rock mass 500ft high and a mile around the base. Here is found the famous Rock cave Temple dating to the First Century BC. The caves of Dambulla sheltered the King Walagamba during his 14 years of exile from Anuradhapura. When he regained the throne he built the most magnificent of Rock Temples to be found on the Island. A UNESCO World Heritage Site.
Overnight stay in Sigiriya or Dambulla.

After Breakfast proceed to Sigiriya. Climb the Sigiriya Rock Fortress. Sigiriya is home to the 5th Century “Fortress in the Sky” which is perhaps the most fantastic single wonder of the Island. It is also known as Lion Rock because of the huge lion that used to stand at the entrance to the fortress. Within its triple-moated defense the huge rock rises almost to a sheer height of 500ft. On its summit are the foundations of what was once a great and sumptuous palace and gardens complete with swimming pool. On one of the stairways the only known ancient work of Sinhala secular painting survived in the form of Frescoes of life sized damsels in all the freshness and delicacy of their original colour.

After lunch checkout from hotel and transfer to Kandy, en route visit herbal and spice garden in Matale and see the luscious Cinnamons, Cardamoms, Pepper plants etc. You can also purchase your requirements of spices. Next proceed to Kandy. Kandy is the hill capital. The last stronghold of the Sinhala Kings was finally ceded to the British in 1815. Kandy is an example of the Buddhism’s influence in Sri Lanka today. Temple’s shrines and monasteries keeping alive Buddhist traditions are everywhere. Commence city tour of Kandy, including Upper Lake Drive, Market Square, Arts and crafts Centre, a Gem museum and a lapidary and the Temple of the Sacred Tooth Relic. Evening experience a colorful cultural show where you can really taste the Sri Lankan culture. Kandyan Dance is a dance form that originated in the area called Kandy of the Central hills region in Sri Lanka. But today it has been widespread to other parts of the country.
Overnight stay in Kandy.

After breakfast proceed to Nuwara Eliya. En route visit to Sri Bhaktha Hanuman Temple in Ramboda. Sri Bhaktha Hanuman Temple According to the ancient stories, Ramboda is a area, where the forces of Rama's gather to fight against King Ravana. This temple was built by the Chinmaya mission of Sri Lanka and dedicated to Hanuman. This temple houses for 16 feel height statue of Hanuman. En Route Ramboda falls. Next visit tea factories and tea plantation. Nuwara Eliya - The ‘Little England’ of Sri Lanka, is set against beautiful backdrops of Mountains, Valleys, Waterfalls and Tea Plantations. It is supposed to be one of the coldest places on the island, but is really just like an England spring day although the temperature does drop at night. All around Nuwara Eliya you will see evidence of the British influence. Houses are like country cottages or Queen Ann style mansions. Tea Factory or Tea Processing Center. There are hundreds of Tea factories in the Central Highlands, the Uva region and in the Southern parts of Sri Lanka. Some of these factories are situated in breathtakingly beautiful landscape, surrounded by indeed serene green gardens of tea. A casual tourist to this island cannot call his visit complete if he does not pay a visit to some of them. Visitors to any of these Centers are normally treated with typical Sri Lankan courtesy and normal given an educative, guided tour on the various stages of tea manufacturing process.

Afternnon visit Seetha Amman Temple is located approximately 1 kilometer from Hakgala Botanical Garden. The temple is located in the village called “Seetha Eliya”.This place is believed to be the place where Sitha held captive by the king Ravana in the Lanka of the epic, Ramayana. Afterwards visit Hakgala Botanical Gardens. Hakgala Botanical Garden is one of the three botanical gardens in Sri Lanka. It is the second largest garden in Sri Lanka. The garden has a cool temperate climate because of altitude is 5,400 feet above the sea level. The mean annual temperature ranges between 16°C to 30°C during course of a year. From December to February it has a cold climate. The garden is famous for number of species of Orchids and Roses are planted there.
​Overnight stay in Nuwara Eliya.

After breakfast proceed to Ella. Visit Ravana Water Falls and Enjoying Ella Gap. it's located 19 km south of Badulla, overlooks a spectacular gap in the southern mountain wall where the land falls away in a dizzy drop of 3,000 ft. to the southern plains and the sea, which is visible in the far distance on a clear day. Ravana Falls a popular sightseeing attraction in Sri Lanka. It currently ranks as one of the widest falls in Sri Lanka. This waterfall measures approximately 25 m (82 ft) in height and cascades from an oval shaped concave rock outcrop. During the local wet season, the waterfall turns into what is said to resemble areca flower with withering petals. But this is not the case in the dry season, where the flow of water reduces dramatically. After lunch visit The Nine Arches Bridge, is a viaduct railway bridge in Sri Lanka. It is one of the best examples of colonial-era railway construction in the country. It is located in Demodara, between Ella and Demodara railway stations, then a short trek to visit Little Adam’s Peak in Ella and tranfer to Tissamaharama or Yala.
Overnight stay in Yala / Tissamaharama.

Yala National Park Morning Jeep Safari. Yala is the second largest wildlife park in Sri Lanka, which is famous for its residential population of leopards. You should enter the park early morning after an early breakfast as morning is the best time of the day to observe animals in the park. You will see a vast array of animals including deer, peacock, elephant, wild buffalo and the lucky visitors may get to see a leopard or bear.

​Proceed to Galle. Commence a city tour in Galle. Galle - is considered to be one of Sri Lanka’s most historically interesting towns. Built on a premonitory rock in the south of the Island. It was a major port until about 100 years, but today still handles shipping and sailing boats in the natural harbor. Stroll around the Lighthouse and harbor or visit the old town where you can see the traditional lace makers and wood carvers. An Opportunity to purchase some the finest shell-craft souvenirs in the world. Next proceed to Bentota. En route Boat ride at Madu Ganga River in Balabitiya. Madu River A shallow water body in south-west Sri Lanka, which enters the sea at Balapitiya. The Buddhist Amarapura Nikaya sect had its first Upasampada (higher ordination ceremony) on a fleet of boats anchored upon it in 1803.The Buddhist Kothduwa temple is situated on an isolated island in the lake. Together with the smaller Randombe Lake, to which it is connected by two narrow channels, it forms the Madu Ganga wetland. Its estuary and the many mangrove islets on it constitute a complex coastal wetland ecosystem. In has high ecological, biological anesthetic significance, being home to 303 species of plants belonging to 95 families and to 248 species of vertebrate animals. It might be one of the last remaining tracts of pristine mangrove forests in Sri Lanka. The inhabitants of its islets produce peeled cinnamon and cinnamon oil.
Overnight stay in Bentota.

After breakfast visit to Kosgoda Turtle Hatchery. Kosgoda is famous for its turtle hatchery operated by the Wild Life Protection Society of Sri Lanka. It was established in 1981 to protect Sri Lanka's turtles from extinction. The hatcheries pay fishermen for eggs that they collect at night along the long sandy beach. Visitors are shown the huge tanks filled with new born but lively hatchlings. After being fed the hatchlings are taken to the sea and released when they are 2-4 days old. They are not always released during the safer hours of darkness. Although October to April is the main laying season, some eggs can be found at Kosgoda throughout the year.

Afternoon Spend time leisurely while enjoying the luxurious facilities and service of the beach resort that you stay. In addition, you would do some water sports as per your choice.
Overnight stay in Bentota.

Get up in the morning any time you wish. Spend the day for independent leisure activities, shopping or city tour. Probably most of you would like to do the Colombo city tour.​

Colombo is the largest city and commercial capital of Sri Lanka and is a busy and vibrant city with a mixture of modern life and remnants of a bygone colonial era. Due to its large harbor and its strategic position along the East-West sea trade routes, Colombo was known to ancient traders 2,000 years ago. However, it was only made the capital of the island when Sri Lanka was ceded to the British Empire in 1815. The main city is home to a majority of Sri Lanka’s corporate offices, restaurants, and entertainment venues.

City tour and shopping in Colombo, like many capital cities in developing countries Colombo is fast changing its face. Almost overnight, skyscrapers arise from where old buildings once stood, yet in some parts; the old world charm is retained. A 100-year-old clock tower and several British built, colonial buildings are still to be seen in the city. The Pettah bazaar – where one can shop for bargains, a Hindu and a Buddhist temple, residential areas where you find the stately homes of the affluent, the Colombo museum, the Bandaranaike memorial international conference hall an outright gift to Sri Lanka from the people’s republic of china, the new parliament in Sri Jayawardenapura, colombo lotus tower,  street foods  are some of the places of interest that one can visit to Visit shopping complexes.

According to the flight schedule transfer to the airport for the departure.
For any further clarification or inquiry regarding our Tour of Sri Lanka History​, philosophy and the tour sequences including our policies, kindly feel free to contact us at any time. One of our agents will attend your inquiry and assist you at the earliest possible.

In order to provide a perfect holiday plan please fill the form and submit with maximum possible information. 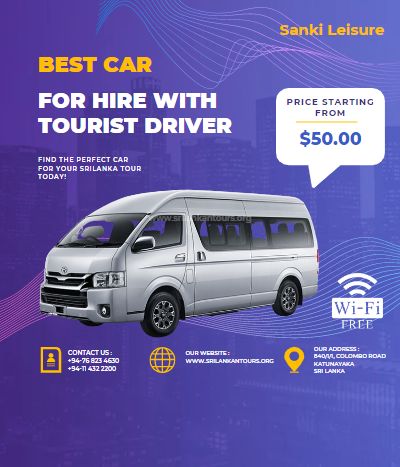